A Technical look at my photography in Shenzhen

Last year (2016), in preparation for my trip in May to China, I decided to analyse the photos I took on previous trips so that I can consolidate and optimise my lenses for this trip.

This was quite an eye-opener for me and it helped me to light my camera bag tremendously.

The analysis was focused on Shenzhen only as I have visited Shenzhen several times over the past couple of years already and although it is one of the 4 most advanced cities in China, there is also enough opportunities to take some landscape photos (Which I am slowly busy investigating…).

A bit more about Shenzhen: Shenzhen is one of four major cities in China and is in the Guangdong Province - right next to Hong Kong Special Administrative Region and was China’s first (1979) and one of the most successful Special Economic Zones (SEZ). It currently also holds sub-provincial administrative status, with powers slightly less than a province. According to the Government census of 2016, Shenzhen has a population of about 11.9 million people and the full metropolitan area has a population of over 18 million people. Shenzhen is a very modern city which is a direct result of both government and foreign investment in this SEZ. Shenzhen is the major financial centre in southern China. The city is home to the Shenzhen Stock Exchange as well as the headquarters of numerous high-tech companies. Shenzhen ranks 19th in the 2016 edition of the Global Financial Centres Index published by the Z/Yen Group and Qatar Financial Centre Authority. Because of my relationship with Xiaoyi, Shenzhen is slowly becoming my second home. 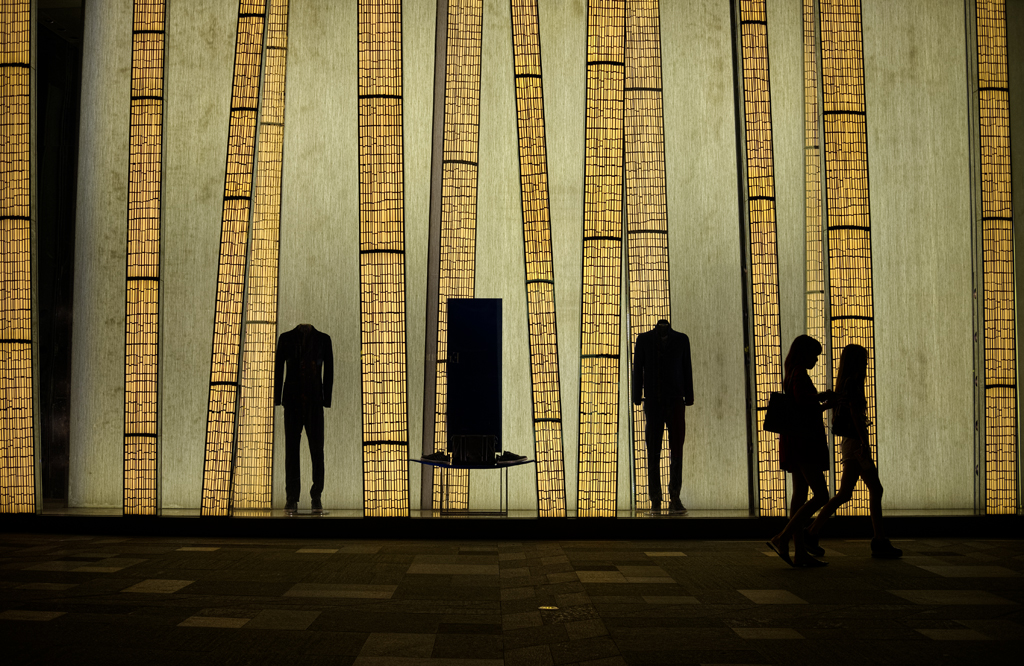 The analysis was done using 101 photos taken in Shenzhen. 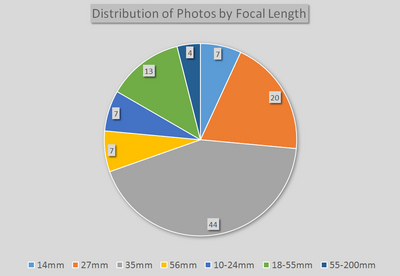 This distribution show the prime and zoom lenses I used [968]

I think a disclaimer is important before you look at the data: The results of this analysis are very skewed because I mostly concentrated on street photography in Shenzhen - in fact, I used the 10-24mm lens only one morning when we deliberately went to Shenzhen Bay Coastal Park to photograph the 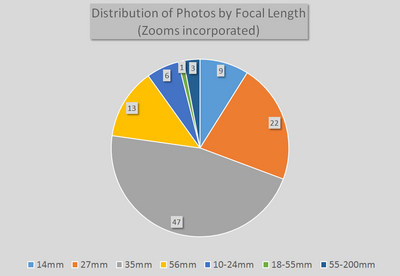 The distribution after merging the primes and zoom focal lengths [967]sunrise. I also kept the 14mm lens on my infrared body (because I forgot to take a body cup with me) which resulted in me not using the 14mm as much as I normally would do.

I also need to remind you that I am using the Fujifilm X system which has a crop factor of 1.5. Thus, when I mention 35mm, the effective focal length of a 35mm full-frame body will be 53mm.

Looking at the distribution of lenses used, the first shocking observation 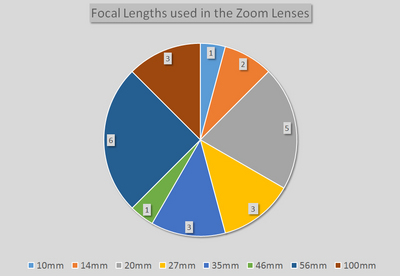 This graph shows the distribution of the focal lengths used on the zoom lenses [970] I made is that I own too many lenses! The next, and I think the most important observation is that I used the 35mm (Fujinon XF35mmF1.4 R) almost 50% of the time.

You will also notice that the 27mm lens is the second most used lens. I need to explain (justify) the 27mm lens to put its usage in perspective; One always hear these horror stories of photographers travelling abroad and get their photography gear stolen or robbed. I know of quite a number of people who had this unfortunate experience while travelling - especially in Europe. For this reason, I decided to invest in a second - hideaway camera kit. I decided on the Fujifilm X-E2 with the 27mm pancake lens. The idea was to always leave it in the hotel safe with a memory card and a charged battery. But then, one day, I decided to take this combination with me to dinner rather than the X-T1. And it was an absolute winner. It is so small that it is much less obtrusive than the (already unobtrusive) X-T1, yet it basically has all the features of the X-T1 and exactly the same image quality. I started to use it more often leaving the X-T1 in the hotel room. So, I guess we can put the usage of the 35mm and 27mm lenses together, which means that for most of my street photography in Shenzhen (64 of 101 photos) I used this focal length, and then also as a prime lens - not a zoom.

For my final graph, I "optimised" my lens usage by looking at the actual focal lengths used on the zoom lenses. I averaged the focal lengths to the closest 2 mm of a prime lens and then count them as part of the prime lens' focal lengths. Doing this, the 27mm and 35mm combination was used in a whopping 69 of the 101 photos. 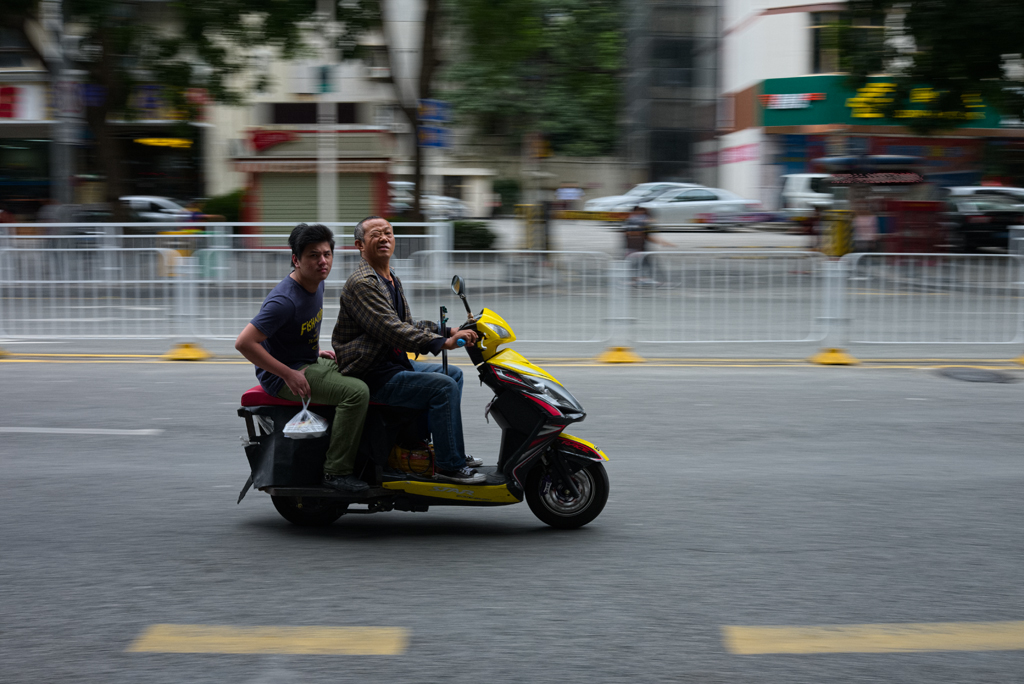 I can with a comfortable feeling leave the 18-55 zoom lens at home on the upcoming trip. Other people could make the opposite observation - leave the 27, 35 and 56 mm primes at home and only take the 18-55! And, I must tell you, it would not be a wrong choice, in fact, I did do this on one of my previous trips. The image quality of the 18-55 zoom is amazing, at any given focal length and aperture, it would produce a photo that I will be totally satisfied with. The three things that are tipping me over towards the primes are: All the photos in this article were taken using the 27mm lens (except for the panorama at the top which was taken with the 18-55 at a 35mm focal length).