In 2013 I was privileged to be invited to form part of the judging congress of the China 15th International Photographic Art Exhibition. My fellow judges were from all parts of the globe and were a very diverse group of distinguished photographers. Although most of our time was taken up judging the 153 000 photographs, we did get some time for photography. One thing I noticed on these photography outings, was that I was the only person with huge photo gear (Nikon D700 with 14-24, 24-120 and 70-200 lenses). Most of them were using smaller cameras and two of the four fellow judges in the Visual Arts category were using the Fujifilm X-Pro1 camera. This obviously created some debate and they tried their best to convince me that they nowadays prefer these over their professional medium format gear - even for commercial jobs. One judge (from the UK) is a professional model photographer with Hasselblad equipment, and he showed me some of his photos asking me to tell him which were taken with the Hasselblad and which were taken with the Fujifilm X-Pro1 camera. Based on the image quality and tonal range I could not find any obvious differences, but in some cases, the shallow depth of field was a giveaway for the medium format sensor! (In my research I later found out that Fuji manufactures the Hasselblad H series cameras and all Hasselblad lenses).

Back in South Africa, I (as usual) started my research as I found carrying my equipment around had become a drag. My initial research was a bit of a disappointment as the current Nikon offerings left me with only two options, namely the Nikon 1 Series and the Nikon Coolpix A fixed lens camera. The small sensor of the 1 Series makes it basically impossible to create any photo with a shallow depth of field, while the DX sensor of the Coolpix A is tempting, but the fixed 18.5mm lens does not suit my kind of photography. When the DF arrived I was very happy, but then I found out that it is in fact not really any smaller and I would still use my normal lenses, which in any case, form the bulk of my equipment.

In my review of the Nikon DF I took a star trail photo along the R59 highway (just south of Alberton), but due to some cloud cover, the star trail did not end up as a star trail - just a long exposure photograph with cloud streaks. So I decided to repeat this test, this time with the Fujifilm X-T1. Based on the high amount of ambient light I used the photo stacking technique to create a one-hour exposure (30 x 2-minute exposures). Back at home I processed the star trail photo and was very surprised to find that this star trail is the cleanest of all the star trail photos I have ever

1 hour star trail photo taken with Fuji X-T1 during the 2014 Photoparadise Landscape workshop. Photo taken near Elliot in the Eastern Cape, South Africa [1051]taken. Usually, I need to spend the time to do some clean-up of noise residue that was not handled by the camera or software, but with this star trail, there was nothing to do! Since taking this photo I have also taken star trail photos using the single one-hour exposure technique, and again I found that the noise handling is exceptional good - noise is non-existent on a one-hour exposure (for this type of photograph I always switch on the in-camera "long exposure noise reduction" ).

To test the camera for typical travel photography I took it to the streets of Johannesburg and was rather impressed with the speed of the auto-focus system. I was very sceptic about the lack of an optical viewfinder, but the X-T1's electronic viewfinder (EVF) is state of the art. After a few hours, you actually do not realise that you aren't using an optical viewfinder. In fact, when I went back to using the Nikon D700 the first thing I missed was the amount of information displayed in the EVF 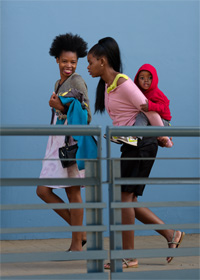 Take on a Sunday morning in New Town, Johannesburg [1049](such as a live histogram) that took most of the guess-work out of the image creation process.

For this walk-about I had only 2 prime lenses: the 56mm F1.2 and the 14mm F2.8. Both are excellent lenses - some of the best I ever had the privilege to use. The EVF really excels when you start using the 56mm lens at F1.2. Fuji did not just replace an optical viewfinder with an electronic viewfinder; they build a system around the EVF. 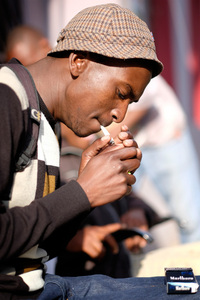 Technical Data: Fujifilm X-T1, 56mm @ F1.2 [1050] In the settings you can switch on a function called "focus peak". This function creates a highlight around all the contrast areas that are in focus. This gives you a very good visual feedback of the exact focus point achieved. All my photos taken at F1.2 were absolutely sharp at the selected focus point I selected. I get the idea that with this camera I will get many more keepers than with an ordinary DSLR.

I also took the camera with on our annual landscape workshops in Lady Grey and Barkley East. I ended up only using this camera and never used my Nikon camera! I thoroughly enjoyed the ease of operation of the camera.

Taken near Barkly East, Eastern Cape during the Photoparadise 2014 Landscape Workshop (10 second exposure) [1054] The placement of the dials, as well as its size, makes it an absolute pleasure to carry around. During the landscape workshops, I used it for all my usual type of landscape photos, included long exposures using a 10-stop ND filter. Here again I found another huge advantage of the EVF: I could see exactly how the colours would be rendered through the 10-stop ND filter, and any custom changes to the white balance were reflected directly in the viewfinder before taking the photo - this is the first time that I didn't need to do any post-processing to fix the false colours produced by the 10-stop ND filter!

Photo taken on the New England road close to Lady Grey during the 2014 Photoparadise Landscape Workshop [1052] Being a Fujifilm camera, it has built-in film profiles and I found that the Velvia profile rendered beautiful warm landscape colours. Although I do believe in shooting in RAW, my demo model did not come with any software, so I had to shoot in jpeg and raw and initially I had to use only the jpeg images. In a separate article, I will tell you about my experiences with the Fujifilm raw files.

So now I need to confess that this camera already found a permanent place in my bag and the current plan is that on my next trip to China in (November 2014) it will be my only companion to capture my memories of the beautiful landscape of China and its friendly people!